A Hero in Full 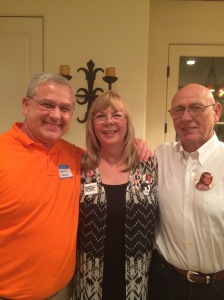 Growing up, Pete Rose was my idol. He played baseball like I thought the game should be played. All hustle, all the time. As I grew older, my idols came and went (so did my baseball skills!), and I learned that there is a difference between heroes and idols. I found that idolatry dehumanized the person and ascribed to them mythical attributes. A hero by definition (and by contrast) has done something heroic, but allows for human mistakes and misgivings, in a word imperfections or the right to be just a regular person who has done something extraordinary.

However, to meet a hero in person does give one pause. Not because you ascribe superhuman traits to them, but because you know they have been through something extraordinary, whether wonderful or horrific, and you don’t want to upset them or embarrass yourself by saying something stupid or insensitive.

It was against that backdrop that I met Sandy and Lonnie Phillips last night at an event in downtown Houston. Their beautiful daughter, Jessi, was murdered at the Aurora theater shooting on July 20, 2012. Sandy and Lonnie were in town for a call to action and fundraiser for Moms Demand Action for Gun Sense in America, the grassroots organization started in a kitchen in Indianapolis, IN following the murder of twenty schoolchildren and six educators on December 14, 2012, in Newtown, CT.

Proving that there is a difference between the mythology attributed to idols and the humanization of heroes, right off the bat, both Lonnie and Sandy made it aware to me that they were regular, genuine, gracious people. In fact, when Sandy hugged me at the restaurant where we were to have dinner, she told me she was sorry for my loss. Here I was, ready to give my condolences on the loss of her daughter and she was consoling me on the loss of my wife. And instantly we bonded over our losses. At dinner we talked gun violence prevention, her hope to speak with Senator Sanders regarding his position on the “Protection of Lawful Commerce in Arms Act” (PLCAA) allowing gun manufacturers product liability protection afforded no other product in America, thanks to the lobbying efforts of the NRA and the power they wield over politicians. We also talked about how the upcoming holidays are always a difficult time and how she and Lonnie will be going away again this year to regroup and recharge. Of course, this came up after she asked me what I was doing with the kids and I told her we were going away because none of us wanted to deal with the holidays.

It is the true character of an individual when they can bond with you over something big or small placing you on equal footing. My apprehension over meeting Sandy and Lonnie was misplaced. Both of them are wonderful, ordinary people thrown into a situation they did not choose and who have dedicated their lives to work so that no other parent has to walk the path they have been forced to tread.

In front of a group of about 50 women from the greater Houston area, Sandy and Lonnie described the horror of July 20, 2012 in visceral terms leaving no dry eye in the room. She answered questions and followed it with an amazing statement about how while she is forced to walk this path, she is lifted emotionally by the efforts of those who have come to this movement of their own accord and desire to make America a safer place. This was her call to action and the response from the room was immediate. By the end of the night over $10,000 had been raised and people were encouraged to join Moms Demand Action to do whatever they were comfortable doing knowing that the combined efforts of the organization brought a 3.5 million member counterbalance to the powerful, but aging, NRA and a vocal juggernaut to the halls of Washington, D.C. and statehouses across the country. I am proud to now call her a friend and stand ready to do whatever I can to help make her path even slightly easier.

Jessi’s mom is a genuine, ordinary woman responsible for carrying her daughter’s legacy and message forward while working every day toward a future where no other mother has to endure what she has been forced to live with. That’s what makes her a hero and Jessi should be proud.