How better to share my grief about the loss of a friend than through a story? After all, isn’t that, ultimately, how we remember those we love who leave us?

Blaine Toshner died this week. He was many things to many people, but he was above all a kind and gentle soul to everyone who had the pleasure of having had encountered him. He sought to brighten everyone’s day with a terrible pun or awful joke, always leaving us with a smile on our face as we left him to face the challenges before us; his simple but always effective gift to each of us. Let me back up.

In 2008, my wife was diagnosed with a very aggressive form of breast cancer, a type with which the doctors in Rhode Island knew little about and even less about how to treat it. Over the course of about six harrowing weeks of tests and pain followed by a string of never ending bad news and poor prognoses, we decided to pick up stakes and move to Houston to seek treatment at the M.D. Anderson Cancer Center. Our children, twins, a boy and a girl, were scheduled to begin their freshman year in high school in September. We moved in August, full of doubt and fear. The kids were brave and adjusted well to moving from a school with 800 students in it to one with almost 4,000, from a home they had known since childhood to a rental in Texas and from all of their childhood friends to a town where it was us against the world and an insidious intruder bent on killing their mother.

Lisa and I made a point of attending the open house at school in order to meet with all of the kids’ teachers, specifically to point out the circumstances of our situation and ask that the teachers contact us if they saw the kids’ slipping in school or becoming distracted by events at home. One teacher stood out as having already made an effort to get to know the kids. He was a young English teacher named Blaine Toshner. Everyone seemed to call him Coach. Apparently he was involved with the football team. Apparently, football was a big thing at the high school. I had forgotten that we were in Texas and that some stereotypes are based on fact. We soon learned that he was, in fact, one of the coaches on the high school team. There seemed to be about a dozen coaches on the team, and about a thousand players. Every time we saw him at a game, he would make a point of coming up to us to ask how Lisa was, tell us a terrible joke and gush about how good the kids were.

Blaine was a guardian angel for the kids that year. He was always there for them, never intruding, but always available, always watchful, always concerned, always in touch.

My wife suffered terribly that year. She underwent all manner of treatments:  neoadjuvant chemotherapy, a double mastectomy and radiation. At the end of the school year she was done. She rang the bell at the hospital signifying her completion of treatment, was cleared and we packed our belongings and drove the 2,000 miles back to Rhode Island, glad to leave the nightmare of cancer in Texas, but sad to leave our guardian angel and newfound friends.

The kids’ sophomore year was spent back home in Rhode Island trying to reestablish a “normal” life but under the ever present threat of a recurrence. We lived in three month chunks of time bookmarked by Lisa’s follow-up visits to M.D. Anderson. It was in the spring that we all decided to travel to Houston together for her follow-up that we got word that the cancer had returned in her lungs. We flew home, devastated and depressed, gathered our thoughts and determined that we could no longer be that far away from the hospital. We decided to sell our home in Rhode Island and move to Texas. The emergency department at M.D. Anderson would be 45 minutes away rather than 2,000 miles away. If the cancer was going to be that aggressive, we were going to meet its aggression with overwhelming ferocity.

The kids finished up their sophomore year early, thanks to the kindness of the teachers and administration at home. We flew to Texas and quickly found a small house to buy. We put our home in Rhode Island on the market and I flew home, and with the Herculean effort of many friends, held a mammoth yard sale, selling and giving away so many treasures of our lives that I’m forever grateful that Lisa was not there.

The kids began their junior year of high school back at the same school as their freshman year and once again, Blaine was there, no longer their teacher, but always there as their friend and guardian angel. We saw him less frequently because of this, but stayed in touch. We heard stories of him helping other students and marveled at his boundless compassion. When it came time for the kids to begin the college application process, they looked to one person for referral letters. Blaine wrote them both glowing, personalized letters. Ultimately, both kids chose to attend the University of Texas at Austin, mostly, no doubt because of the proximity to their mother.

In 2010, Blaine’s sister’s and mother visited Texas and he invited us all to lunch. It was a raucous time filled with stories, laughs and new memories I will never, ever forget! I remember that afternoon as a day of muscle pain in my stomach from laughing so hard. 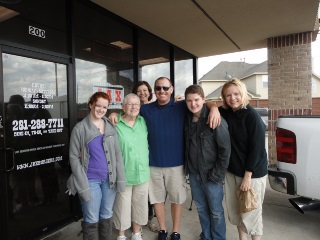 By this time, Blaine had decided to move back to Wisconsin to take care of his wonderful mother. We chatted on Facebook and he said he looked to me as a role model as having been someone who risked everything to care for someone he loved. I had never thought of our decision to move to Texas as a sacrifice. It was just something we did. Lisa and I have always been ones to circle the wagons when a crisis threatens. We always say we’re going to have the phrase “we do what we have to do” tattooed on our foreheads. Given Blaine’s compassion and boundless energy at reaching out to make sure my children were healthy, the thought of him looking up to me hit me hard. I remember crying when I read his text. He wrote, “I think we find people throughout life who, whether they know it or not, help us make the decisions we know are right but not easy.” How much I think of that now.

My last contact with Blaine was this past June. Lisa was turning 50 and as we were away from home and most of our friends, I wanted to put together a slide show of our friends and family holding up a sign wishing her a happy birthday. I sent a message to Blaine asking him for a picture. True to form, he sent a picture, but not of himself. It was a picture of his mother and Jamo punctuated with a joke about him being addicted to the Hokey Pokey but taking charge and turning himself around.

I’ll miss Blaine, but I can never forget him. He was a guardian angel for my children when they needed him most. For that I am forever grateful. People do come into our lives at certain points and they leave their marks, their fingerprints on our souls. If the trajectory of my life is altered, even ever so slightly; if I am more compassionate today than I was yesterday and more tomorrow than today, it’s because Blaine Toshner was a part of my life and will continue to be my guardian angel.