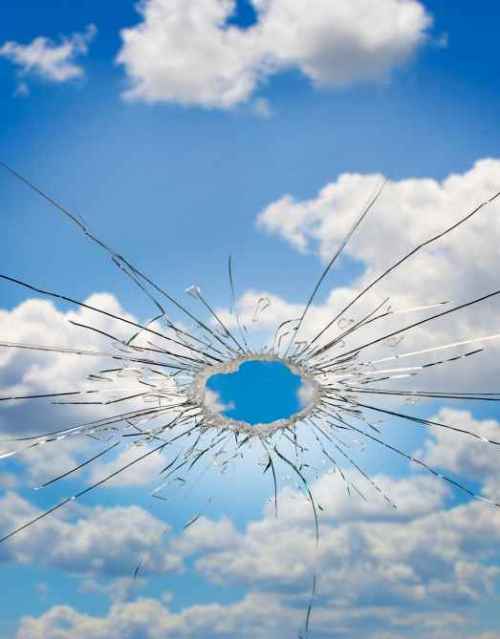 As horrifying as this is, we, as Americans did not even bother with a collective shrug. We barely blinked when a gunman opened fire in Santa Barbara or when there was yet another school shooting in Oregon. We have become accustomed to both violence and guns. Too many of us are numb to it now. Couple that with the pervasive misogyny of the intertwined subcultures of men, guns and violence and you begin to see the framework upon which our society is now built and upon which some of our elected officials feed.

Ms. Bullock was in Los Angeles to accept an award. Nothing surprising there! Actors and actresses have an entire season dedicated to celebrating their celebrity. However, this award speaks to the subculture we’re discussing. Spike TV holds a Guy’s Choice Awards show every year. Ms. Bullock was there to accept their “Decade of Hotness” award. Now, whether or not Ms. Bullock is a talented actor is best left to individual taste (however her box office receipts and salary per movie indicate that she is worth the investment), but must we award “hotness”? How, in 2014, am I supposed to look at my daughter and tell her not to be too concerned with her looks, that we celebrate intellect and passion above appearance? She would laugh until she cried. And then she would shatter every mirror in our house. We need only look at the tabloids at the checkout line to see the focus of our shallow society. From “Best Bikini Bods” to “Guess who went under the plastic surgeon’s knife?” to the latest drivel from all the celebrated-beyond-reason Kardashians, we idolize celebrity, but only pretty celebrities. 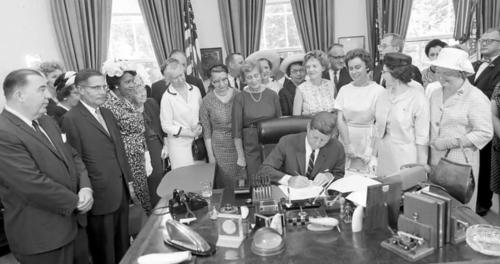 On June 10, 1963, President Kennedy signed the Equal Pay Act of 1963 as an amendment to the 1938 Fair Labor Standards Act. Specifically, it states that:

However, according to a study of The White House’s National Equal Pay Task Force, in spite of the fact that women play a major role in the economic engine of America (as compared to 1963) and the fact that women now earn more advanced degrees in America than men, women had only closed the gender wage gap from 61 cents for every dollar earned by men in 1963 to 77 cents for every dollar earned by men in 2011, the latest year for which data is available. While undoubtedly a significant gain, one would think that a law passed in 1963 would have completely eradicated the difference by now.

It wasn’t until 1984 that the term “glass ceiling” was first used by former Family Circle Editor Gay Bryant, and that was used to describe the competition between women in reaching the highest levels of business. She is quoted as saying, “Women have reached a certain point – I call it the glass ceiling. They’re in the top of middle management and they’re stopping and getting stuck.”  This definition of the glass ceiling would seem to mesh with the findings of the Council of Graduate Schools study where the majority of advanced degrees were obtained by women (59.5% of master’s degrees and 52.2% of doctoral degrees).

However, it is still a man’s world. From the media’s “sex sells” focus on female images Photoshopped beyond human anatomical limits to the overt compensation of men’s 3-story pickup trucks and need to openly carry AR-15’s and AK-47’s in Target and Home Depot, the male psyche is being beaten educationally and logically by women and has resorted to beating the female image with the only objects left to their stunted minds, guns and misogyny. Essentially, rather than dragging the woman to their cave by their hair, they subjugate her by obliquely beating her with the blunt object between their legs through anthropomorphic means in the form of a firearm. What a shame. 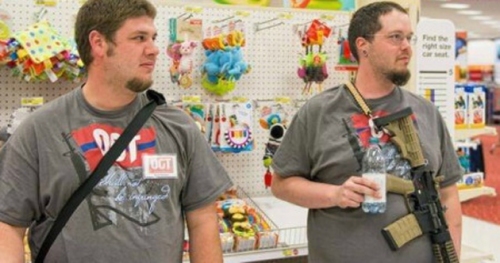 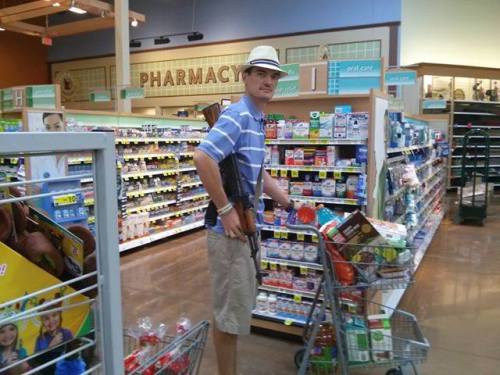 If only men saw women as equals and sought their advice on the important social issues of our time, perhaps we would find a partner instead of a punching bag. As President Kennedy said repeatedly, beginning in 1959, “a rising tide lifts all boats.” Instead, members of Open Carry Texas have resorted to calling members of Moms Demand Action for Gun Sense in America, “thugs with jugs” and have a one minute free for all where they open fire on a female mannequin. Guns get bigger, but, we’re told,”they’re only used for hunting,” as if we are supposed to believe that deer, birds and rabbits have gotten exponentially larger and evolution has furnished them with Kevlar skin.

We’ve become little boys with big toys (or more accurately, big boys with little minds and big guns). Am I expected to teach this to my daughter? Am I expected to treat my wife this way? Am I expected to subjugate my mother like this? And what does any of this teach my son? You may call me less than a man or a wimp or a feminist, but I’d rather open my arms and use my intelligence than open my legs and show my ignorance.

(If you’re interested in a little mental exercise, read this post. I was writing it in 2012 as news broke from Newtown, Connecticut of a shooting at an elementary school.)

A Conversation With My Daughter 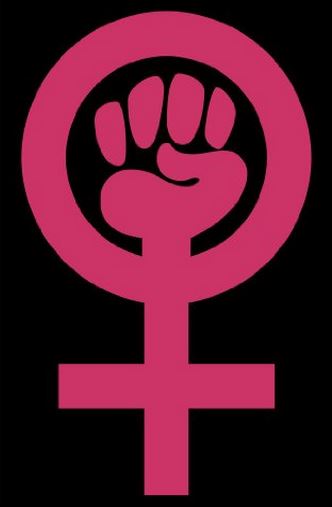 “Taught from their infancy that beauty is woman’s sceptre, the mind shapes itself to the body, and roaming round its gilt cage, only seeks to adorn its prison.”

Mary Wollstonecraft, A Vindication of the Rights of Woman

I am lucky. As a heterosexual, white, American man, I found, out of the millions of available women, the best. Does that sound right? “I,” “I found,” “I am lucky.” Let me try to rephrase that. A strong, compassionate, brilliant woman, a woman with talent and brains and limited tolerance for fools, a woman destined to positively impact the lives of countless people, chose me. Better. Although I was right, I was/am lucky.

I had the most incredible conversation with my 19 year old daughter last night. It was a text message conversation, but, in many ways, the technology was not a barrier to thought or feelings, but an aid. Perhaps it is the inherent delay in responding or the necessity to distill thoughts into typed words. Whatever the cause, the effect was blinding, pure logic bathed in compassion. The subject: Feminism.

Again, I’m a guy. But that does not preclude me from discussing or even embracing feminism. Ultimately, feminism is one wavelength within the light spectrum of equality.

Plato wrote in The Republic,“If women are expected to do the same work as men, we must teach them the same things.” That was in 380 B.C.

On October 9, 2012, Malala Yousafzai was shot in the head by the Taliban on her school bus for having the audacity to think, “Let us pick up our books and our pens,” I said. “They are our most powerful weapons. One child, one teacher, one book and one pen can change the world.” (I Am Malala: The Girl Who Stood Up for Education and Was Shot by the Taliban)

Clearly, in 2,392 years we have done little to evolve as humans. Why do some (males and females) see feminists as the enemy? Why have some vilified them as militant, anti-men?

To help answer this question, I need to back up to a 30,000 foot view of “civilized society.” My daughter is an artist, and the best kind. She is infused with talent, an incredible work ethic blended with a strong desire to learn and stirred by passion; truly a recipe for greatness, both as an artist and as a compassionate human. As we chatted last night we wandered into a metaphor that, I think carries some veracity. The idea that while seeing all issues in pure black and white is easy (read: requires little or no thought), it is boring and excludes the rainbow of colors that make life (and art) joyful. Seeing (or rather acknowledging) the gray in an issue requires us to pause and consider differing opinions, perspectives and, potentially, shaking the ledge upon which we base our morals. It is neither comfortable nor easy, but it is necessary and should be required! Somewhere along the line, Descartes argument cogito ergo sum (I think therefore I am) has been bludgeoned into “I am, therefore I need not think.” How sad.

Feminism is not the charge of a select group of women but rather the obligation of all rational thinkers, therefore, all of humankind. Where it is the weak minded and threatened man who disdains feminists, so too is it the weak minded and male-oriented, society-molded female who defends organized subjugation. To subjugate one is to imprison all. Eleanor Roosevelt said it best, “”No one can make you feel inferior without your consent.” Our willing abdication of thought may inevitably lead to an Orwellian future of newspeak, doublethink, thoughtcrimes and perpetual war. How far down this road are we already? Who wants to drive?

I am proud of my daughter. She is strong-willed, passionate and compassionate, thinks for herself and wants to make the world a better place. If that is the definition of a feminist, sign me up.