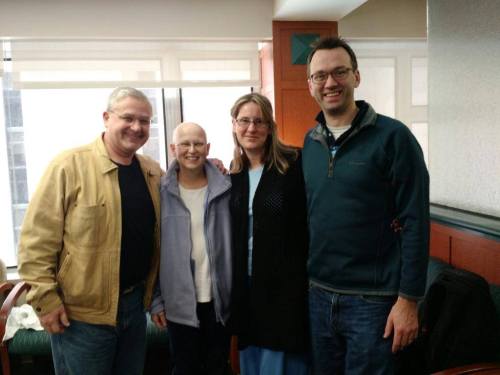 Weightlifters are strong. Carbon fiber is strong. America is strong.

These are the things we are taught represent strength. But in my experience, these items are breakable. Weightlifters may be able to bench press a Buick, but given enough reps, they can lift no more. Carbon fiber has a known tensile strength beyond which it breaks. And America has shown itself corruptible at various times throughout its history for a variety of reprehensible reasons. Why aren’t we taught that it is the individual who is strong?

I have known many people in my life. Some I can unconditionally qualify as kind, decent people. Others prove their lack of knowledge and compassion every time they profess their intellect. Most of us are a homogenization of sound and poor traits, just trying to get through life without the benefit of a manual. And then there are those who personify strength and determination.

The second trait of the strong is their response to the inevitable appearance of obstacles in life. Whether they be health concerns, family crises, professional challenges, or some other impediment, the strong know no other response than to fight. I also believe they find it easier to fight for someone other than themselves. Indeed, I believe they often garner the will to face indescribable personal challenges by projecting the need for success on the impact failure will have on those they love. Lao Tzu said, “”Being deeply loved by someone gives you strength while loving someone deeply gives you courage.”

A third trait of the strong is the ability to let go. This may sound counterintuitive but bear with me. In her column, Ann Landers once wrote, “Some people believe holding on and hanging in there are signs of great strength. However, there are times when it takes much more strength to know when to let go and then do it.” Whether this is a response to a terminal illness after fighting for as long as possible or the self-preservation associated with ending a relationship, letting go requires its own hard decision and determination to see it through.

In each of the traits outlined above, the only people I have known who have incorporated each of them and lived their lives accordingly have been women. This is not to denigrate men or relegate them to some pile of the weak. Instead, it is merely a reflection on the strongest individuals I have encountered.

I lost another of these incredible, inspiring women last night when Cathy Nance passed away. Cathy leaves two small children and a loving husband. But that is only the beginning of her legacy. You see, the legacy of the strong is strength. A strength her husband Scott will need to draw on now to carry on and a force her family and friends will need to harness to continue her work.

I met Cathy in Texas as accidental activists moved to action by the gun murders of twenty elementary school students and six educators at Sandy Hook Elementary School in 2012. Ignorance and acquiescence were no longer options for many people following that day in December. In the months that followed I met incredible people as we spoke out demanded better for our nation. To a person, everyone I met was a woman. It is hard enough being a woman given the male-dominated society we live in. We nod to some amorphous, chivalrous maxim while ignoring the sexism rampant in every facet of life. Imagine then how difficult it was to stand up and challenge gun violence and the gun culture in Texas where guns probably outnumber people.

I was only in Texas because we were seeking cancer treatment for my late wife. She was the strongest person I believe I will ever meet, encompassing every trait of the strong and radiating enough of it to allow me to survive her and continue living. Cathy’s own cancer diagnosis followed sometime after that. Why is it that the strongest people I know, people with the determination and courage to face any injustice or personal challenge, are hit with an unwinnable foe? It never seems to be a fair fight. I’ve known people who have beaten cancer, but their cancer was either caught early or of a nature that science had a remedy. That is not to say those survivors were not strong, they are, but why is it that the strongest are hit with something unbeatable? And what is it in these individuals that they continue to fight unabated? It is the embodiment of Faulkner’s line in Absalom, Absalom!, “If happy I can be I will, if suffer I must I can.” That is the hallmark of the strong.

Weightlifters and carbon fiber and America may be strong (with limitations), but perhaps the best example of strength is, ironically, something associated with women. It is the diamond.

There is one more quote I would like to reference here, and it aptly references a gun. I can think of no better summation of my friend Cathy.

“I wanted you to see what real courage is, instead of getting the idea that courage is a man with a gun in his hand. It’s when you know you’re licked before you begin, but you begin anyway and see it through no matter what.

― Harper Lee, To Kill a Mockingbird

I have known several diamonds in my life, and we lost one last night. Thank you, Cathy, for showing us what strength looks like. May we all harness the strength you radiated to continue your work and to strengthen ourselves. A fitting legacy to another lost diamond.