“That we have the vote means nothing. That we use it in the right way means everything.”  Lou Henry Hoover, First Lady of the United States 1929-1933

As we wind down to the end of a presidential campaign that feels as if it’s been going on since the early Bronze Age, the overarching story of this election can be summarized in one word – women.

It began with the nomination of a woman by one of the two major parties. It devolved into stories about the treatment of women by the nominee of the other major party. And it will be settled by the largest demographic within the voting public – women.

According to one recent poll, Hillary Clinton is leading among women by 33%. Eric Trump famously made the mistake of posting a map showing his father ahead nationally but omitting the fact that the map showed what the results would look like if only men voted. Here is that map: 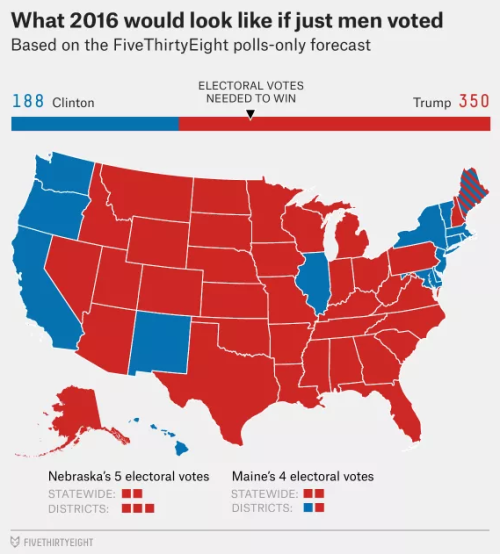 The map shows Mr. Trump winning the White House with an Electoral College tally of 350 versus 188 for Secretary Clinton. Unfortunately for Eric Trump, people noticed, and the response was savage. Here is the obverse map showing what the election results would look like if only women voted:

As you can see, Secretary Clinton would win the Electoral College with a staggering tally of 458 votes versus Mr. Trump’s meager 80 votes. And therein lies the story of this election. Women will decide the outcome. Here is Nate Silver’s FiveThirtyEight site on the potential effect this disparity would have on the general election:

“To put those numbers in perspective, that’s saying Trump would defeat Clinton among men by a margin similar to Dwight D. Eisenhower’s landslide victory over Adlai Stevenson in 1952, while Clinton would defeat Trump among women by a margin similar to … actually, there’s no good comparison, since no candidate has won a presidential election by more than 26 percentage points since the popular vote became a widespread means of voting in 1824. To get to 33 points, you’d have to take the Eisenhower-Stevenson margin and add Lyndon B. Johnson’s 23-point win over Barry Goldwater in 1964 on top of it.”

And while you may not like everything (or anything) about Secretary Clinton, she has worked hard to earn women’s votes. One of her greatest surrogates has been another woman, First Lady Michelle Obama, who has been phenomenally effective on the campaign trail. On the other hand, Mr. Trump has stumbled his way toward the election by demeaning women (among many other groups) and been accused of sexual assault by eleven women. And one of his greatest surrogates has been Mayor Guiliani who has himself had a checkered past with women and who recently suggested that Mr. Trump would be better for the United States “than a woman.” Considering that women constitute the largest voting block in America, wouldn’t it be better for Republicans to embrace women than to shun them if they ever hope to win the White House again. Especially given the inevitable demographic changes altering the United States, all of which favor Democrats and which Republicans have ignored to this point at their peril. Sorry, but gerrymandering can only take you so far.